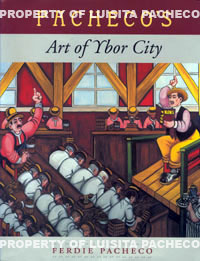 FERDIE PACHECO has done it again. In Ybor City Chronicles (UPF, 1994) he brought to life the immigrant utopia that was Tampa’s Ybor City in his childhood. In The Columbia Restaurant  Spanish Cookbook (UPF, 1995), he and coauthor Adela Hernandez  Gonzmart created something more than a cookbook, highlighting  the recipes, history, and personalities behind of one of America’s  most famous Spanish restaurants.

Now, in Pacheco’s Art of Ybor City, the Renaissance man and bon  vivant best known as Muhammad Ali’s “Fight Doctor”- a man who  has also worn the hats of family physician, Emmy Award-winning  boxing commentator, historian, playwright, screenplay writer, and  author of five books- here offers 33 of the paintings that have established his reputation as an artist.

In these full-color reproductions we see the Ybor City of the  1930's and  40's (and earlier) that inspired Pacheco from the  beginning. With the same flare and storyteller’s gift evident in Ybor  City Chronicles and The Columbia Restaurant Spanish Cookbook,  he narrates the unpredictable course of his development as an artist  and tells the story behind each painting in this collection.

In the bright muralist-style colors that have become his  stock-in-trade, Pacheco renders a storehouse of memoirs too vivid  ever to grow dull. So long as he has hold of us, there is no Ybor City  more real than this one- with its cigar factories, palm trees, bolita  gangsters, trolley cars, clubs and diners and cafes, and the  Spaniards, Cubans, Sicilians, and oddball personalities who walk its  red-bricked streets.

Picture book, memoir, history lesson, and portrait of the artist,  Pacheco’s Art of Ybor City is four books in one. Together they  do what only art can: they turn memory, love, and nostalgia  into a city you can visit.