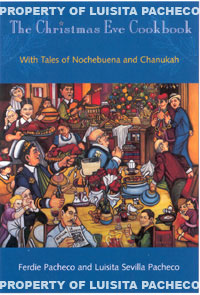 by Ferdie and Luisita Sevilla Pacheco

In this beautifully illustrated collection of nearly 200 recipes and 19 holiday stories, Ferdie Pacheco and Luisita Sevilla Pacheco create a holiday melting pot of immigrant lore and cuisine in America.

The book begins in Ybor City, where Ferdie Pacheco grew up in the 1930's and 40's, an immigrant utopia of Cubans, Spaniards, Jews, and Italians in Tampa, Florida. Pacheco’s own Latin heritage sets the stage for the book’s focus on Christmas Eve, or Nochebuena- for Latin families often the biggest feast day of the season, when friends and family sit around a table laden with traditional dishes, telling stories that grow more colorful each year.

As the Pacheco’s know, however, the beauty of American holiday celebrations is their rich diversity, and so they range well beyond Ybor City, collecting recipes and stories- old and new- from Cuban, Spanish, Italian, Sicilian, Mexican, and Jewish friends around the country.

A master story-teller, Pacheco recounts tales that are by turns hilarious, moving, and inspiring. Known to many as “Fight Doctor,” Pacheco includes a delightful Nochebuena story about his daughter Tina and Muhammad Ali.

Together these recipes, stories, and Ferdie Pacheco’s own wonderful  illustrations remind us that while no two Christmas Eve or Chanukah  celebrations in America are ever quite the same, they all have in common  the love of good food and a good story. The Christmas Eve Cookbook  offers enough of both to make the holidays last all year round.