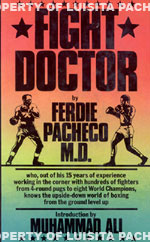 Ferdie Pacheco consorts with the great and the famous, the sophisticated and the jet set, but he has his small office in the heart of the Miami ghetto, where he treats the poor. His abiding passion is prizefighting, and this is the free-swinging, behind-the-ropes story of his fifteen years in boxing.

Dr. Pacheco has worked in a corner of the ring with hundreds of fighters, from four-round pugs to eight world champions, including Muhammad Ali himself. He has never charged any of them a cent for his services, although Ali has in recent years insisted upon paying him despite receiving no bill.

In these pages you will encounter the denizens of that last perfect example of a classical boxing gymnasium- The Fifth Street Gym in Miami Beach, which is full of fighters in all stages of their careers, every one getting ready to step into harm’s way. Ferdie is the man who set Ali’s jaw after Ken Norton broke it, and who has treated Ali’s tender hands so that he could punch effectively ever since the first Sonny Liston fight. His riotously spirited account of it all makes for one of the most enjoyable and informative books ever written about boxing. He follows Muhammad Ali’s crazy road to glory from Lewiston, Maine, to Las Vegas and from Zaire to Manila, flavoring his tale with the keenest analysis of the champion’s peculiar mystique and the antics of the incredible people who surround him.