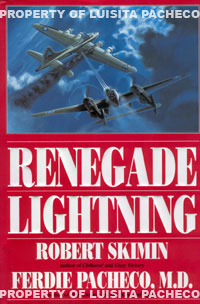 Here is a tale of high adventure, romance and intrigue. Based on a true story, it commemorates the heroism of American fighter and bomber pilots early in World War II.

It is 1943 in the Mediterranean theater of operations. An Italian fighter pilot is flying a captured American P-38 Lightning and shooting down unsuspecting American bombers. When Capt. Josh Rawlins loses his B-17 crew to the predator, he vows revenge. Parachuting into Sicily with a New York mobster- reformed at least for the duration of the war- Josh finds out from the Sicilian mafia who his enemy is and goes after him. The Italian pilot’s lovely wife, an archaeologist in Egypt, is caught up in the unfolding chain of events as the novel builds toward a climactic shoot-out over the Mediterranean.