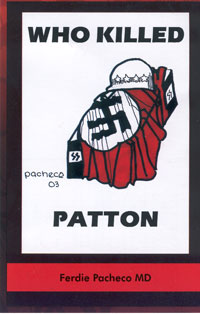 Fifty years after serving in Patton's Third Army, Lt. Phil Brenan is living in quiet retirement in Florida, finally rid of the nightmares about the war which plagued him for years. the phone rings and hears the voice of Top Dog, the Mountain Man his top kick, who sheltered him and guided him through the horrors of three years in combat. No one had seen him in 50 years.

"I've got to see lieutenant. It's about waht happened to Georgie, there at the end." "I thought he died in a car crash." "No, at the end there, they kill the General." "What they?" "Us they, that's who. Come tomorrow, I'm dying, you've got to know."

The book takes on his strange ride of discovery.